Americans are again reaching new highs when it comes to their financial confidence in the pandemic era. But women still lag behind men, indicating ongoing struggles for those who are still unemployed—or left the workforce altogether.

Men’s confidence in the economy and their finances is a solid 5 points ahead of women’s (62.1 versus 57.4) and at no point during the pandemic have women had a higher consumer confidence index than men. At times, they have been separated by nearly 10 points. 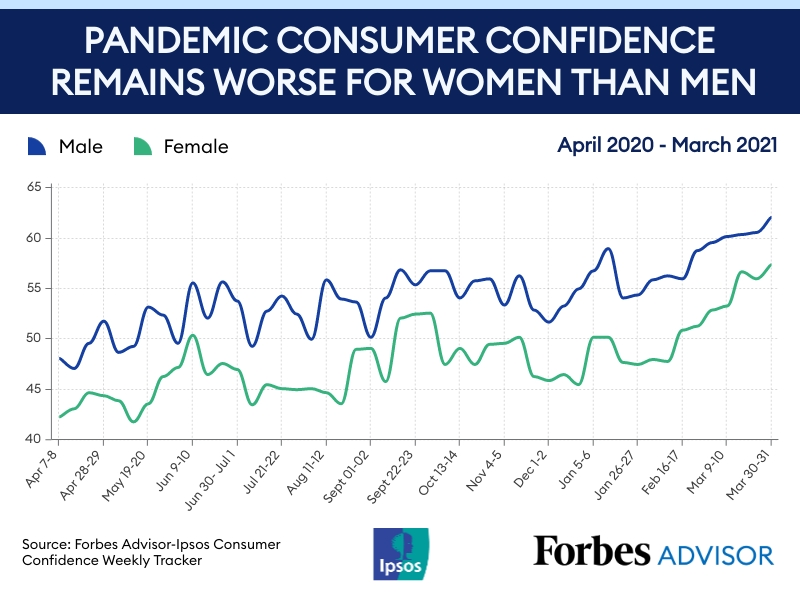 Historically, women tend to have lower confidence levels than men. But the pandemic struck men and women unevenly, with women coming out behind. The pandemic recession caused 5.4 million women to lose their jobs last year, while 4.4 million men lost theirs. While the unemployment rate for men versus women is nearly even with the national rate of 6.2%, looking at unemployment alone doesn’t tell the whole story.

After a year of economic lockdowns, women’s participation rate in the labor force is just under 56%—two points lower than prior to the pandemic. It hasn’t been that low since the late 1980s.

Women dropped out of the workforce at almost twice the rate of men in 2020, to care for children during shutdowns and remote learning, while other women have done so to take care of sick family members. But the longer they’re out of the workforce, the harder it is to make up for lost time in terms of earnings, contributions to Social Security and other savings goals.

The stimulus package passed in March includes larger direct payments—including payments for kids and adult dependents—and a temporary expansion to the child tax credit that could provide more cash payments for parents later this year. Those funds could provide a financial cushion for women preparing to return to work, but some households may still be digging out of debts they accrued during the pandemic to make ends meet.

Even though Centers for Disease Control and Prevention (CDC) Director Rochelle Walensky warned this week that it’s too early to return to “normal” life, including travel, signs continue to point toward cautious optimism as the vaccine rollout continues.

Six in 10 Americans think the economy will recover quickly once restrictions to control the pandemic are relaxed.

“The increasing major and household purchase comfort, combined with the higher levels of people thinking the economy will snap back, makes it look like the progress of the vaccination effort continues to fuel American hopes that our economy and lives will soon be able to get back to normal,” said Chris Jackson, senior vice president for public affairs at Ipsos.

Survey methodology: Ipsos, which surveyed 929 respondents online on March 30 and 31, 2021, provided the results exclusively to Forbes Advisor. The survey is conducted weekly to track consumer sentiment over time, using a series of 11 questions to determine whether consumers feel positively or negatively about the current state of the economy and where it looks to be going in the future.

One arrested for sexual assault, imprisonment in Moxee

Washington Trooper, shot in the line of duty, thanks hospital staff and 911 dispatchers

🚨WEATHER ALERT DAY🚨: Breakdown of when and where the wintery mix will fall in the valley